The cave is situated at an altitude of 1470 m in western part of Stara Planina Mountain, so called Ponor Planina. The nearest village is Zimevitsa. some 65 km away from the city of Sofia and 75 km from EuroSpeleo Forum site. To get to the cave one have to to make a one-hour walk, starting at an altitude of 1100 m and ascending to 1470 m, approximately 2 km long, which starts south of Zimevitsa village. There are many beautiful views of the different parts of Western Stara Planina Mountain that can be seen along the trail to the cave.

The cave is in a Jurassic limestone massive. The entrance of the cave is at the base of nearby limestone cliff 8-10 m high.

The cave starts with a 18-m vertical shaft (pitch). There are no rebelays on the descent/ascend. The pothole leads to a beautiful inclined gallery with lots of stalactites and stalagmites. The grotto continues with a slope offering even more spectacular speleothems. There are several small sinter lakes at the bottom. The cave ends with a narrow passage.

Complexity of the cave
Not a complicated route. It is required participants to be familiar with the SRT techniques.

Other
The participants must have a bottle of water, energy bars or some packed food. On the way back from the cave there is an option to stop and eat at a nearby restaurant.

Departure time
9 am from the Red Cross National Training Centre.

Photos from the cave by Tzvetan Ostromski. 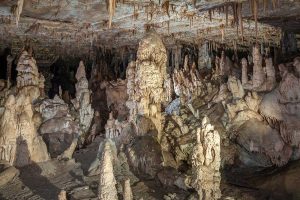